We are excited to announce that Tanner Cornell is our new assistant director for the marching and pep band!  Tanner brings a wealth of music and marching knowledge to the A.C. Davis Band instructional staff.  Tanner will primarily be oversee the visual program at Davis.  We would also like to thank Rob Nelson for  years of service to the Davis Band Program and wish him and his wife the best of luck on their new adventures in Louisiana! 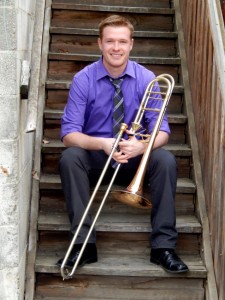 Tanner Cornell is a native of Eastern Washington and a graduate of Pasco High School. After being involved in the band programs in Pasco from 5th grade through high school he continued playing at Columbia Basin College in Pasco. It was here that Tanner got involved in Drum Corps, and started marching with the Blue Knights from Denver, CO for three years. After his age-out year, Tanner continued touring with drum corps as an instructor for Spokane Thunder, Blue Knights, Crossmen, and Columbians. Tanner also assisted in starting the marching band at Chiawana High School.

Currently, Tanner is working on his Bachelor’s in Broad Area Music Education at Central Washington University and is set to graduate in March of 2016. As a trombone player he plays in numerous groups at Central including the Wind Ensemble and Jazz Band 1. He is also is currently a drill writer for the Central Washington University Marching Band, and on staff with the Columbians Drum and Bugle Corps. Tanner is excited for the opportunity to help instruct the marching band at Davis High School this year!